SKU
1451
In stock
Processing
1 - 2 Business days
Regular Price $102.52 Special Price $78.86
$ USD
Description
An all-in-one solution for students to enjoy the hands-on experience of programming, electronics, and robotics. More details
Add to Compare Add to Wish List Add Your Reviews
Skip to the end of the images gallery
Skip to the beginning of the images gallery 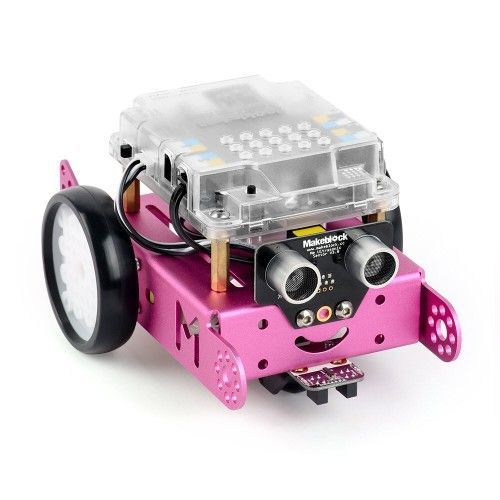 Product Description
Product code: MAK028-P
mBot is an all-in-one solution for students to enjoy the hands-on experience of programming, electronics, and robotics. Working with mBlock inspired by Scratch 2.0, controlled by wireless modules, this easy-to-assemble mBot provides infinite possibilities for students to learn STEM (Science, Technology, Engineering, Mathematics).
Children Safeguard
Compared to the previous verison, mBot v1.1 comes with a casing specially designed for protecting main control board. Meanwhile, the casing is atomized to safeguard children’s eyes from the glare of the on board LED.
Better Auxiliary Wheel
The ball omni-directional wheel of previous version is replaced by a mini nylon caster wheel that performs better when moving to any direction and dramatically reduces the little clack sound caused by a steel ball.
Contracted But Not Simple
Contains 38 assembly parts that can be assembled in 10 minutes and color-labeled RJ25 ports for convenient wiring, making sure more time can be spent on programming and creativity.
Graphical Programming
Drag-and-drop graphical programming software mBlock developed based on Scratch 2.0 provides a quick way for kids to learn programming, control the robot, and realize multiple functions from the robot.
Fun, and Fun
mBot is all about fun and creativity. It comes with various basic pre-assembled options, including obstacle-avoidance car, line-following vehicle, remote control car, and can be used in multiple games like balloon bursting game, soccer playing, sumo etc.
Infinite Extensibility
The mechanical body of the mBot is compatible with Makeblock platform and most of Lego parts, while the electronic parts of it is developed based on the Arduino open source ecosystem. This makes sure that the mBot has infinite extensibility, using any mechanical parts and electronic modules you need to turn it into your “dream robot”.
Resources
mBot User Manual
This manual will be included in the package. It has general information about mBot and instructions for putting all parts together.
mBlock (Scratch & Arduino code)
mBlock is a graphical programming environment based on Scratch 2 and Arduino. Additional blocks have been added to control the mCore controller that comes with the robot. The Arduino mode allows individuals to translate the scratch blocks into Arduino code instantaneously! For advanced programmers, you are able to program the robot using the Arduino IDE.
The software is free and available for both Windows & Mac.
mBot App (only with Bluetooth)
mBot App is a free remote control App that specifically designed for the mBot robot (Bluetooth module required). It’s an easy way for users to pair a cellphone or tablet with mBot by Bluetooth.
Download method: search mBot in the Apple App Store or Google Play Store.
Compatibility: Requires iOS 7.1 or later. Compatible with iPhone, iPad, and iPod touch, Android version 2.2 and higher.
mBlockly (only with Bluetooth)
mBot App is a free mblockly App that’s specifically designed to work with the mBot (Bluetooth module required) on your iOS system to control your robot and learn programming by snapping graphical building blocks together.
Download method: search mBlockly in the Apple App store.
Compatibility: Requires iOS 7.1 or later. Compatible with iPad.
mBot Course – mBlock Kids Maker Rocks with Robots
Kids maker rocks with the robots has twelve chapters. It can guide kids to enjoy fun of programming mBot in a lot of game scenes for learning graphical programming, electronics and robotics.
mBot Course – Scratch 2.0 The Adventures of Mike
Scratch 2.0 the adventures of Mike has nine chapters. It can guide you to explore the world of Scratch 2.0 by creating a lot of interactive stories, games and animations.

LEARN TO CODE AT HOME WITH mBot
FREE Self-Paced, In-App, Progressive Curriculum to Engage Kids at Home
100's of In-App Puzzles and Challenges to Explore