Canadian and US Domestic Shipping. 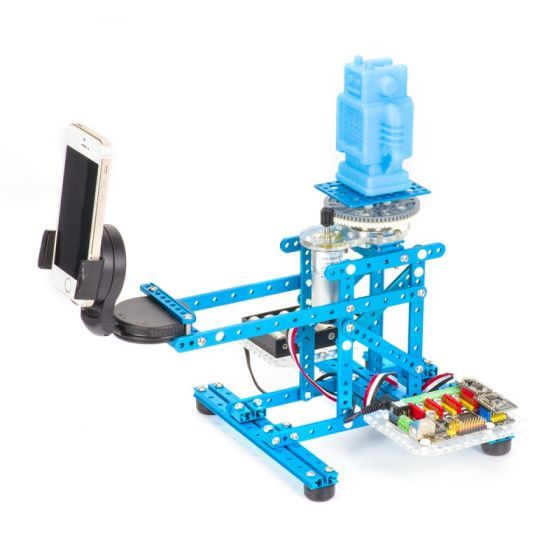 Product Description
Ultimate 2.0 is a ﬂagship robot kit based on Makeblock platform with rich features and strong compatibility. Whether you are an enthusiast of Raspberry Pi or Arduino, a mechanical or electronics engineer, a teacher, or a student, it helps you learn the knowledge of mechanical structures, electronic modules and programming skill with ease.
Robotic Arm Tank
This Robot Arm Tank consists of a highly-adaptable track chassis and a ﬂexible robotic arm. This robot is designed to help you grip, lift, and deliver objects in various terrains.
Robotic Bartender
Robotic Bartender is made up of a mobile chassis, a variable angle support structure and a self-adaptive bracket. It can independently pour wine into a glass (or do other similar action) and deliver the glass to you.
Camera Dolly
Camera Dolly consists of a mobile chassis and a 360-degree swivel base. Add a smart phone or a camera onto this robot and start filming from a low angle. You can also preset a path for the robot to follow in order to capture the moments of your life (motion noise may affect the sound recording).
3D Capture
3D Capture is a simple yet powerful 360-degree rotating platform, consisting of a cell phone holder and a rotating structure. Add a cell phone to realize 360-degree panoramic ﬁlming or let the robot ﬁlm while moving around small objects. When connected with an app, it can simulate 3D scanning beautifully.
Self-Balancing Robot
This self-balancing robot is another building form of Ultimate 2.0 Robot Kit. It is driven by two encoder motors at its two wheels. It can move forward and backward while keeping balance.
Powerful Mainboard – MegaPi
MegaPi is small but powerful mainboard based on Arduino MEGA 2560. It has six function areas, which can be connected with modules to realize wireless communication or drive various motors. MegaPi is capable of driving 10 servos or 8 DC motors simultaneously. It can be used to build various robots, such as 3D printer and other robotic projects.
Graphical Programming from PC
Ultimate 2.0 is fully compatible with mBlock which is a graphical programming environment based on Scratch 2.0 Open Source Code. It makes programming projects and interactive applications easier through simply dragging and dropping function blocks.
Features
Related Posts
No
Technical Specifications
Mechanical Parts: